A letter requesting to add Slavs and Eastern Europeans as a separate category on their application forms and a request for a list of scholarship given to their students categorized by ethnicity and nationality was sent to:

We must know the ratio of Slavs and Eastern Europeans students to other groups in their programs.

If this action will not bring any satisfactory results, the next step is legal action.

My dear white people, and my dear people of color:

I am not white. I am an ethnic minority. I am a Slav and Eastern European.

We demand ethnic minority status for Slavs and other Eastern Europeans.

You see, we, Slavs, are not white. We are different people, separate from other Europeans and we must have our own category.

We Slavs are not even an ethic group. We are a different race, race, race, learn that word, separate and different from Anglo-Saxons and others. Technically speaking, the Anglo-Saxons are the so-called White and we have nothing in common with them. We just happen to live on the same continent.

It is disheartening that the American people are still shaped by racism. Just listen how angry people are about colonialism and they call it European colonialism, which is another bigoted racist ignorant statement. Here’s the inconvenient truth: the Western Europeans have had colonies all around the world, including here in America; we are the colonized ones.

We, Slavs, are not White. We might be Caucasian in which case you should not use that term to describe the English. We are a separate race that must be recognized legally as an ethnic minority and receive affirmative action program in the USA. This is not a question of “if;” it is a question of “when” and the sooner we are recognized the better for all involved.

Once, we, Slavs, receive our status, race relations will improve in America.

We need a separate ethnic status also so we can study our progress in this country.

For as long as we are classified as White, we will never have the chance to improve our opportunities to achieve the American Dream. We live in this unusual paradox. On one hand, we are scorned as “privilege white” only because our skin is white, on the other hand, we don’t enjoy benefits of this so-called white privilege, yet under the law, we are denied the fruits of remedial action. And that is institutionalized racism.

So, as a group, we remain invisible. We are labeled as Caucasians, whatever that means, while simultaneously racialized as the “other”, those from Eastern Europe, you know, those with those stupid names.

Do not let your institution be engaged in institutional racism. We, Eastern Europeans, have been second-class citizens for too long. We all, as the whole society, must work together to detect institutional racism, especially when it is disguised. For example, simple example, but profound, we are missing from your textbooks. According to your textbooks we don’t even exist. We must stop practices within educational, political and legal institutions where we are constantly penalized for the color of our skin.

When are you going to end your racist policies?

So let’s begin with a first and a small step on the path of racial recognition. I ask your Administration to add Slavs and Eastern Europeans as a separate category on your application forms. You went ahead and recognized homosexual unions or created restrooms privileges for the transgendered community, created new pronouns and made them legal and so on. You did not wait for the government to tell you to do so. It was your initiative. So do not try to refuse to include us as a separate category while hiding behind the letter of the law because that will be just another and a perfect example of institutional racism.

Recent immigrants from Africa and probably descendants of African slave owners and slave traders, receive ethnic minority status and affirmative action program the moment they put their feet on the American soil. They also get scholarships not available to Eastern Europeans. Why?

You give university scholarships to people from the Middle East and other Muslim countries who hate America but not to us. Why?

I ask that you give us a list of scholarships given by race and national origins, including PHd programs. We have to know who is getting what and why.

It’s time for us to design a cultural sensitivity program that will educate our faculty and the diverse student body nation-wide on what really happened in the past and what is happening now. All racist lies and misinformation must be corrected.

The Old Face of Racism

We, Eastern Europeans are victims of a very complex web of legal, political and social dynamics that has rendered us ill-treated. We do not have the same degree of access to the attributes needed for moving up in the general class system that is money, education, contacts and know-how, which other groups have.

Also, a very important point: do not, under any circumstances, use the ability of Eastern Europeans to pull themselves by their bootstraps even in face of persistent discrimination and racism as a sign of our “white privilege.” This is racial terrorism!

I ask for a written answer to my request of adding Slavs and Eastern Europeans as a separate category on your application forms. As well as the list of the scholarships given, by race and national origins. We want to know how many Slavs are on that list.

Do not wait for the government. Start recognizing us as an ethnic minority now. Stop institutional racism.

We must stop practices within educational, political and legal institutions where we are constantly penalized for the color of our skin.

Join us in our effort to gain recognition as a distinct people.

My dear white people, and my dear people of color: I am not white. I am an ethnic minority.

Does Melania Trump have Stockholm Syndrome? Do we?

She certainly seems to be suffering from Stockholm Syndrome, but she is not alone. Millions of Eastern Europeans suffer from this psychological condition too. 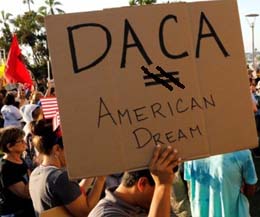 Stop addressing people who are illegally in this country as “Dreamers”. It is insulting to us, legal immigrants. I am a legal immigrant. So I am not a dreamer? Should I return my visa to the government, go back, and return illegally to be called a “Dreamer”?

Make a difference: Join us

Send us your First Name, Last Name, Email, and Message to: